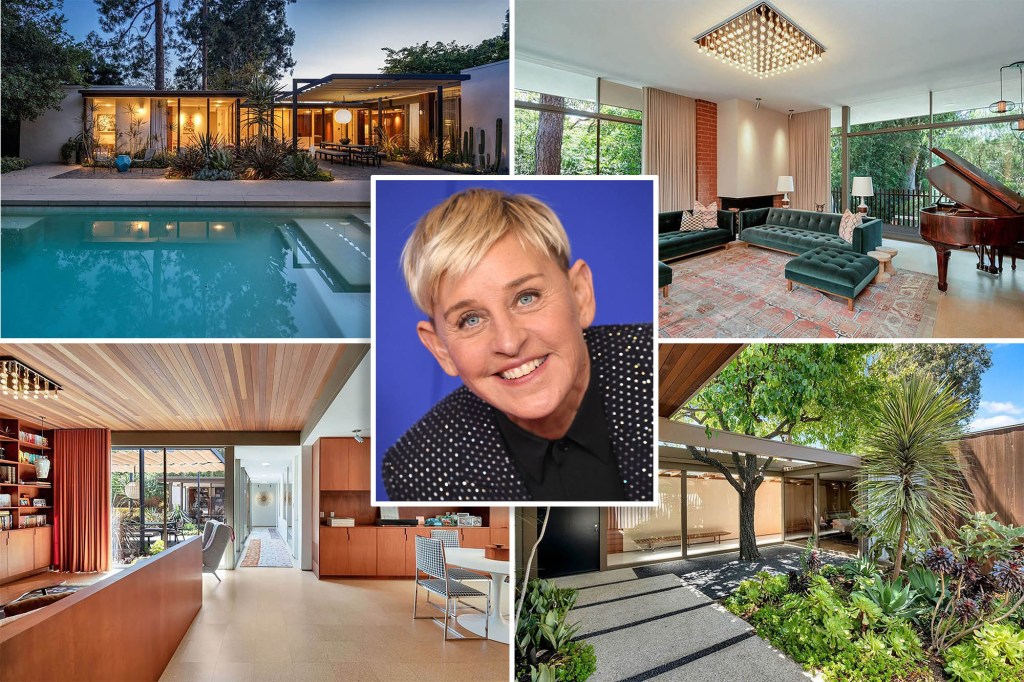 The house was built in 1961 by famed architect Robert Skinner and has been completely restored by architect John Bertram with designer Sarah Shetter, according to Realtor.com.

The home often mistakenly called the “Rowan estate” was originally commissioned by banker David H. Rowen (with an “E”) and his wife Shirley, permit records and archived city directories show.

Architect Bruce D. Becket purchased the home in 1967 and owned it until 2012, when talent agent Gregory Cavic and his wife Jessica — whose parents founded Soap Opera Digest — purchased the home for $3.5 million, according to Los Angeles County records.

The 0.42-acre lot has a courtyard entry, a pool, greenery, trees and gardens designed by Judy Kameon of Elysian Landscapes, according to the listing.

The same road in Hidden Valley Estates welcomed one celebrity in May while another departed. To get to DeGeneres’ new house, you have to pass Adele’s new $9.95 million home, which formerly belonged to Nicole Richie. Meanwhile, Katy Perry unloaded a $7.47 million house at the end of the street, real estate records show.

Tori Barnao of Compass and Brett Lawyer of Hilton & Hyland had the listing. Kurt Rappaport of Westside Estate Agency Inc. represented the buyer.

Despite her real estate dealings, DeGeneres doesn’t see herself as a house-flipper. She said she loves decorating and even had a two-season home design show in 2015 and 2016. The money she makes is just incidental, she has said.

“We [DeGeneres and her wife, de Rossi] buy a house, and we love it, and we stay in it, and then we get a little bored because we like a different style or a different aesthetic, and I love furniture, and I love decorating … So if I find something else and we make money, it turns out, why not move to another house?” DeGeneres told Today in a 2018 interview.

The 63-year-old will bow out of her talk show next year, she announced in May, saying the decision was not a result of toxic workplace allegations leveled against her.