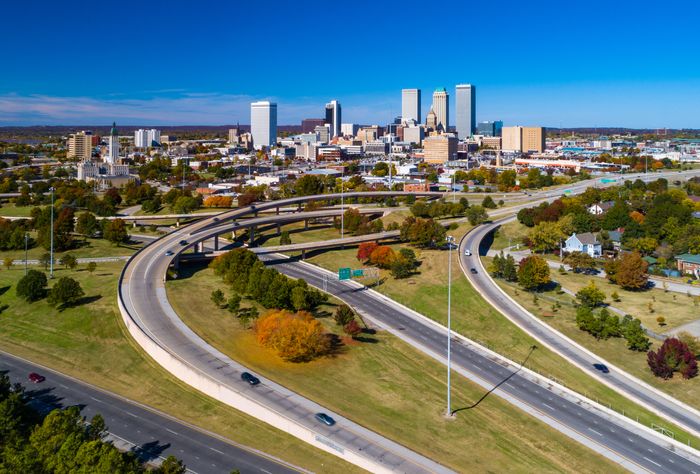 Home prices are high in many areas of the country, which might make you hesitant to invest in real estate. The good news? We’ve found a number of cool towns and cities where you can still find plenty of homes below $200,000. Here are five of our top picks.

If you want a thriving food scene: Tulsa, Oklahoma

Tulsa became a boomtown in the early 1900s, when oil was discovered in a nearby community; the resulting money led to a flood of skyscrapers and municipal buildings built in the Art Deco style. The city today still retains some of that splendor, and money has recently flooded into the downtown area, including a $51 million development that includes apartments, a hotel and more. Spend your weekends visiting the Philbrook Museum of Art, which has an exemplary collection of Native American art; the 25-acre Philbrook Gardens, recently named “the most beautiful place in Oklahoma” by House Beautiful magazine; or the Woody Guthrie Center, which presents exhibitions that tell the story of the history of music in the United States. Catch a ballgame played by the minor league team the Tulsa Drillers, or visit the Green Park, a 100-acre tract of land along the Arkansas River. Enjoy the fusion of Southern and Midwestern culinary traditions, including fried chicken at Wanda J’s, or the chef’s tasting menu at Farmbar, which highlights the agricultural cuisine of Oklahoma. For less than $200,000, you can buy this stylish English-style home, or this four-bedroom home with a large back deck.

If you want a small town feel near the ocean: Cambridge, Maryland

Once used as a model for a town in a novel by James Michener, this waterfront town has been working in recent years to revitalize its downtown area. That includes making the area more walkable, and hosting an annual New Year’s Eve Boat Drop, which involves dropping a replica of a workboat down a 60-foot ramp. Located on the Choptank River, just north of the Blackwater National Wildlife Refuge, and about a two-hour drive away from Washington, D.C., Cambridge is also close to the birthplace of Harriet Tubman, the legendary conductor of the Underground Railroad. Her history is commemorated in the town’s Harriet Tubman Museum and Educational Center. The local cuisine is very seafood based, with restaurant highlights including the Ocean Odyssey Crab House and Restaurant and Snappers Waterfront Café + Tiki Bar. With a budget of $200,000, you’ll have plenty of housing options, including this charming three-bedroom Cape Cod-style home near downtown and this historic three-bedroom home built in 1918.

See the lowest mortgage rates you can qualify for now here.

If you are raising a family: Des Moines, Iowa

The capital of Iowa, the city prides itself on its 4,000 acres of parkland and 81 miles of trails, as well as its historic East Village, which has more than 90 restaurants, shops and entertainment venues. The city is also great for families with young kids, offering attractions including the Science Center of Iowa, Blank Park Zoo, and the Iowa State Fairgrounds, which holds events throughout the year. Enjoy regular meals at the famous Jethro’s BBQ, and drinks at the High Life Lounge, which calls itself the “champagne of bars.” The city, which is known for being LGBTQ+ friendly, has many options for houses under $200,000, including this two-bedroom ranch just five minutes from the downtown area of the city, and this recently renovated Craftsman-style three-bedroom.

If you want to build your own company: Winston-Salem, North Carolina

Named one of the “South’s best cities on the rise” by Southern Living in 2021, Winston-Salem has made serious efforts to attract entrepreneurs, artists and inventors in recent years. The Innovation Quarter is an area of the city that houses 90 companies, 1,000 residents, five academic institutions (including Wake Forest University), myriad community-based art projects and green walkways dotted with restaurants, cafes and galleries. There’s plenty to do on the weekends, including visiting the Old Salem Museum and Gardens, which commemorates the area’s colonial history, and Kaleideum North, which houses a planetarium. The city prides itself on its food scene, which includes two restaurants —Sweet Potatoes and Mission Pizza Napoletana— whose chefs were recently nominated for James Beard awards.. Although the average price of a home is higher than $200,000, there are plenty of options under that amount, including this recently renovated three-bedroom with a large screened-in porch and this three-bedroom cottage.

See the lowest mortgage rates you can qualify for now here.

If you want to live in a metropolis: Houston, Texas

Many large metropolises in the country have become unaffordable to bargain hunters, but Houston, which is the fourth most populous city in the United States, remains an outlier. In fact, despite housing prices in the metropolis rising 20% in the past year, Houston still has over 1,000 listings on Zillow for houses under $200,000. You’d be hard pressed to find something you can’t do in Houston, considering that the city not only has theater, museum and historic districts, but also 52,912 acres of total park space. Located on Galveston Bay, the city has plenty of access to the ocean, including at East Beach and Galveston Island State Park. For less than $200,000, you can buy a new construction 3-bedroom home just a few miles from the inner loop of the city, or this recently upgraded 3-bedroom brick home.

The advice, recommendations or rankings expressed in this article are those of MarketWatch Picks, and have not been reviewed or endorsed by our commercial partners.