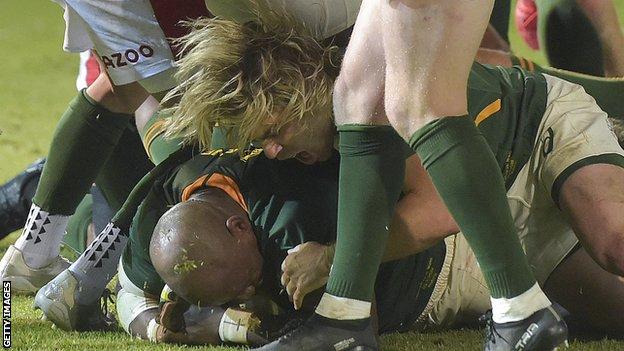 Captain Dan Biggar missed a kick to put Wales ahead before giving away the penalty that gave South Africa the win.

South Africa bounced back with tries from Bongi Mbonambi, Malcolm Marx and Cheslin Kolbe and a penalty try.

It was a remarkable second half, in which Wales lost their discipline, with Biggar, Rees-Zammit, Alun Wyn Jones and Rhys Carre shown yellow cards by Georgian referee Nika Amashukeli, leaving Wayne Pivac’s side down to 12 men at one point.

Even so, they had a chance of victory when late on, with Wales still two men short, replacement hooker Dewi Lake dived over to level the scores, but Biggar missed the conversion.

It was left to makeshift kicker Willemse to pile on the misery for Wales – and Biggar especially – as his successful penalty settled a memorable contest.

It was an agonising finish for Wales, who were unrecognisable from the side that had won only one game in the Six Nations and suffered a humbling home defeat by Italy in their last outing in March.

This was also the same ground where 24 years earlier Wales had suffered their darkest day with a 96-13 hammering by the Springboks.

But for all the character and endeavour in a match played at altitude against the world champions with Will Rowlands and Taulupe Faletau outstanding, Wales squandered this chance of victory and will need to be far more disciplined in the next two matches in this series.

It was an 11th successive defeat for Wales against the Springboks in South Africa, leaving Pivac’s side to target victories in the next two Tests, in Bloemfontein and then Cape Town.

South Africa were not short of motivation. Loftus Versfeld was just under a 52,000 sell-out and, because of the coronavirus pandemic, it was the first time the Springboks had played in front of a full home crowd since they won the World Cup in November 2019.

Wales made eight changes from the side that lost to Italy, with Leicester flanker Tommy Reffell winning his first cap.

The visitors honoured Bennett with a wonderful try in their opening attack, finished by speedster Rees-Zammit in the third minute.

Biggar missed the conversion but slotted over a drop-goal from just inside South Africa’s half despite blood pouring from his head.

Television match official Joy Neville judged the drop-goal just sneaked over the bar and decided not to penalise the returning Dan Lydiate and Faletau for an awkward attempted tackle on South Africa prop Frans Malherbe.

South Africa dominated the first scrum but Elton Jantjies, preferred to Handre Pollard, hit both posts with an unsuccessful penalty.

Jantjies made amends a couple of minutes later with a simple three points before Biggar responded.

The inconsistent Jantjies missed his second penalty kick at goal before making a mess of a vital kick to touch and Reffell ensured some respite for Wales with a turnover penalty.

That laid the platform for an opportunist Rees-Zammit effort from a Wales lineout that allowed the wing to grubber the ball forward and collect possession to score.

Biggar converted to give his side an 18-3 half-time lead before he was shown a yellow card for slowing possession down despite a brilliant try-saving tackle on Faf de Klerk.

South Africa responded at half-time by bringing off Jantjies, with Wille le Roux coming on at full-back and Willemse moving up to fly-half.

The hosts took advantage of their extra man and driving lineout with Mbonambi powering over, with Willemse converting before Biggar returned to the action.

Tomas Francis came on to the field to replace Lewis but was almost immediately knocked out trying to make an attempted tackle on Steven Kitshoff.

There was concern shown as Francis initially lay motionless on the field and was quickly attended to by Wales medics before being carried off.

After reducing the deficit to three points, the Springboks’ momentum was halted as Biggar slotted over two penalties to take Wales ahead by nine points.

The hosts again responded with Kolbe latching on to Damian de Allende’s delicate chip kick to score, with Willemse converting.

To add insult to injury, Jones was shown a yellow card after the try for an offside infringement in the build-up.

With South Africa on the attack and captain Biggar losing his composure, Rees-Zammit and Carre were shown yellow cards for professional fouls and the home side took the lead for the first time with a penalty try.

Jones returned and, with Wales two men down, Lake dived over before Biggar’s missed conversion from out wide.

The drama was not over. After Wales replacement scrum-half Tomos Williams kicked possession away with 30 seconds remaining, South Africa attacked, utilising their numerical advantage as Biggar’s deliberate knock-on indiscretion was punished by Willemse.